ResNet, Cornell’s high-speed Internet access provider for students in dorms, made a surprise announcement on Jan. 28 in an e-mail to all subscribers which outlined a plan to nearly double rates and a switch to monthly billing starting next fall.

Students’ bursar accounts will be charged $44.45 per month, which amounts to nearly twice the $205 charged for the nine months of the current academic year. Cornell Information Technologies (CIT) is simultaneously converting the billing of ResNet — Residence Hall Network Service — from semester to monthly payments to align it with CIT’s other offerings, EZ-Remote long-distance network access and ResPhone voice mail.

The e-mail attributed the sudden rate increase to “expected fiscal constraints in the upcoming year,” which have caused the University to drop subsidies which covered approximately half of last year’s ResNet operating costs. Subsequently, the e-mail said, “Cornell wants to be sure that all users of network services pay their fair share.”

“The total cost of operating ResNet for next year was determined and that total cost was divided by the expected number of subscribers,” explained Polley Ann McClure, Vice President for Information Technologies.

However, the number of subscribers may be negatively affected by the rate change, according to ResNet manager M. Scott Walters.

“It’s possible that’s something that would occur after [such an increase],” he said. “It would not seem unlikely that it would happen.”

However, he added that CIT is “looking at the possibility of finding ways to reduce the [rate increase].”

Already, ResNet has received many e-mails from frustrated students.

“It’s not surprising [that such a change] tends to generate a lot of feedback. We’ve seen a lot of 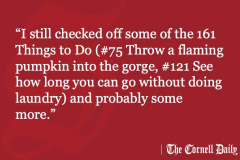 Many students have also expressed concern or anger over the changes.

“I feel that this is a poor decision by Cornell because in a time of a poor economy, they’re trying to extract even more from families,” ResNet user Brendan Ahern ’05 said.

Another subscriber, Tania Lemos ’05, has conflicting feelings about the rate increase.

Continuing, despite the changes, are upgrades to ResNet’s network which will be completed by next fall. The upgrades will convert existing equipment from 10-megabit shared service to 10-megabit switched service, providing overall better network performance.

Jason Rhoades, Director of Communications Services, said that Internet service providers comparable in speed to ResNet are not available on campus. 89 percent of students in ResNet-ready housing subscribe to the service. Many students living off-campus use cable services such as Time Warner’s Road Runner.

This is the "wpengine" admin user that our staff uses to gain access to your admin area to provide support and troubleshooting. It can only be accessed by a button in our secure log that auto generates a password and dumps that password after the staff member has logged in. We have taken extreme measures to ensure that our own user is not going to be misused to harm any of our clients sites.