With an open mind and two sides of the story, you’re bound to learn something new. 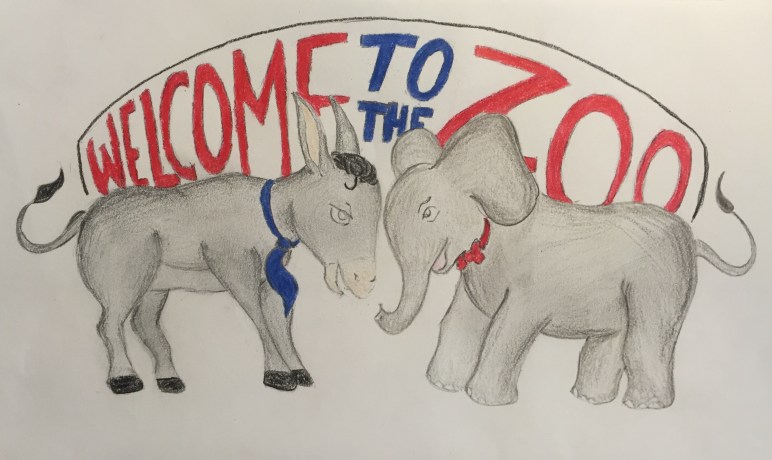 Welcome to the zoo! This is a blog where both the Republican and Democrat viewpoints are represented. The blog is not meant to sway you either way necessarily, just present both sides of the story. You may not agree with the whole article, but hey, you’re likely to agree with half! The topic this week: Guantanamo Bay.

Guantanamo Bay was a response to the devastating 9/11 attacks: since January 11, 2002, the first detainees were transferred to Guantanamo Bay as a part of the United State’s “war on terror.” The prison, often referred to as “Gitmo,” is not on United States soil and therefore has enemy combatant status, meaning that the prisoners are not covered by the United States constitution. The controversy over the treatment of the prisoners is understandable, as processes like waterboarding should not be taken lightly. However, it is important to keep in mind that Guantanamo Bay’s purpose is to protect the citizens of the United States; the actions taken at the base are meant to keep us safe from the high-risk prisoners in the detention facilities and terrorism on a broader scale. Furthermore, the Pentagon has been responsive to credible allegations of abuse at the facilities and have conducted investigations to ensure the base does not stray from this path.

The alternatives to Guantanamo Bay are logistically irrational. Even if Guantanamo Bay were to close, the United States government would need to relocate the functions of the base and find a different facility to house and interrogate suspected terrorists. Currently, Congress, the International Committee of the Red Cross, Red Crescent and, to some extent, the media exercise differing degrees of oversight in Gitmo. The transition period of changing bases would lead to a period of less oversight and transparency. Moreover, changing the location of the base would not lead to any legally significant difference. The detainees have been given, and actively use, their access to legal council. This was demonstrated in November 2004 in the District Court opinion that the Bush Administration had overstepped boundaries in several areas. Unfortunately, releasing prisoners is also an unrealistic option because many detainees released return to their homes and resume terrorist attacks. For example, Mullah Shahzad, a former Taliban field commander, convinced officials at Guantanamo that he had sworn of violence and was subsequently released in 2003. He immediately rejoined the Taliban and was killed in the battle in Afghanistan in 2004. The Department of Defense estimated that approximately 25 out of 200 detainees released have taken up arms again.

As of January 2016, there are 91 detainees at Guantanamo Bay. The facilities are used to hold high-risk prisoners and keep Americans safe from terrorist attacks. Although Obama signed an executive order to close Gitmo in 2009, the facilities are still open as of 2016. This is because the facilities are essential to the war on terror, there are no realistic alternative options and the base is legally regulated.

“Extraordinary Rendition” is the term used to define the illegal transference of foreign nationals suspected of terrorism to other countries so they may be interrogated by methods of torture illegal in the United States. Since the suspects are beyond the legal protection of the States, they are unable to bring legal action against the government and are treated by officers who have no regard for human life.

The Guantanamo Bay detention camp, located in the United States Naval Base in Cuba, is used to interrogate, torture and imprison presumed terrorists, defying all international standards of human rights. Because of this, the Department of Defense tried to keep Guantanamo Bay a secret when it was first established. Gitmo is outside of the United States legal jurisdiction, enabling the officers at the camp to torture detainees in ways that would be illegal in the United States. These methods involve denying prisoners food, forcing them to partake in extreme labor, housing them in atrocious  living conditions, and harassing them in other unfathomable ways. Common systematic torture techniques prisoners endure include waterboarding, binding in contorted positions, sensory and sleep deprivation, sensory bombardment, and sexual humiliation. Eight men have died in the detention camp as a result of the torture. Furthermore, of the eight deaths, the government reported six of them as suicides. This behavior never would be permitted on United States soil. No human being deserves to be treated the way inmates at Guantanamo Bay are treated.

There have been approximately 780 people sent to Gitmo since 2002, at least 600 of which have been released without charges. The United States government sent 600 innocent men to an illegal detention camp, only to realize after years of torture that they are innocent. These men are refused trials and have no way of proving their own innocence. Lastly, it costs $455 million of taxpayers’ money per year to maintain the Gitmo camp; it is significantly more expensive to house one detainee at Guantanamo Bay than it is to jail him in a maximum-security prison.

President Obama’s final goal as president is to close Gitmo. Hopefully, he will be able to achieve this before he leaves office.

Katie Barlow is a sophomore biology major in the College of Arts and Sciences. When not debating politics, she can be found running half marathons and eating nutella by the spoonful. If you’re up for a chat, Katie can be reached at [email protected]

Rebecca Saber is a sophomore government major in the College of Arts and Sciences. She aspires to be Secretary of State, but is willing to settle for Supreme Court Justice. When she is not writing about politics, Rebecca can be found watching TV in her bed or at some musical theater rehearsal. If you want to chat, Rebecca can be reached at [email protected].

Welcome to the Zoo appears on alternate Wednesdays this semester.