The University’s 117th Dragon Day Parade on Friday drew in large numbers of Cornellians, community members and visiting students who bonded over dance, music and celebration.

After weeks of preparation, first-year architecture students dressed in identical black hoodies and held up a massive white, transparent dragon. They chanted “oy, oy, oy” in response to repeated calls of “dragon, dragon, dragon” by a captain.

Upon arriving at the engineering quad, where a phoenix was hanging in the courtyard according to security personnel, the architecture students did a dragon dance by waving the flexible pieces of the dragon’s tail around in an alternating fashion.

Yiwei Xue ’21, a first year architecture student, said she was very proud of their dragon dance.

The parade attracted many people, who stopped by to take pictures on the sidewalks and even joined the crowd to move along with the dragon.

Laurel Doyle ’21 said she went to the parade because she is a freshman and was really curious about how the parade would go and what the dragon would look like.

She said that “the [high] quality construction of the dragon and all the wild costumes people came up with” left memorable impressions on her and that she would “most likely” attend next year’s dragon day celebration as well.

“The thing that surprises me is just the number of people that came out,” Doyle said. “I think people seem really excited. I haven’t really seen the campus come together this much before.”

Sophie Xu-Friedman ’21 said she actually saw the parade two years ago when she happened to be touring Cornell on Dragon Day. Now, as a Cornell freshman, Xu-Friedman said she saw the event in a new light.

“It’s kind of like unity, everyone coming together to build this project together,” she said.

Two high school juniors at Christian Brothers Academy in Syracuse, who plan to apply to the architecture program at the University, happened to be visiting Cornell when they encountered the dragon parade, which they said was a pleasant surprise.

“It’s really awesome because I have never seen [this] before … it makes me really want to come here to Cornell … just love the environment, feels super comfortable to me,”  said Jimmy Xu, one of these high school students.

They added that they were excited about seeing the parade because it was an example of one of the many rewarding learning opportunities at the architecture school. They said this motivated them to work even harder, so they could be accepted to Cornell and participate in building the dragon themselves.

Dragon Day is “a well-known and celebrated rite of spring for the first-year architecture class,” according to the School of Architecture, Art, and Planning’s website. However, the parade has grown beyond an exclusive ceremony for the Cornell students to serve as a get-together for the wider Ithacan community.

Alexia Asgari ’21, a first-year architecture student who participated in creating and carrying the dragon, noticed large families with elderly people and children among the crowds of students.

“I was actually surprised to see how involved and excited the families in Ithaca were for this parade,” she said. “I remember seeing these small children wearing dragon costumes, and it was absolutely the cutest thing I’ve ever seen.”

“It is awesome to know that the work is not just for yourself to look at and be proud of, but rather for everyone to enjoy,” Asgari added. President Martha Pollack joins in on the Dragon Day festivities. 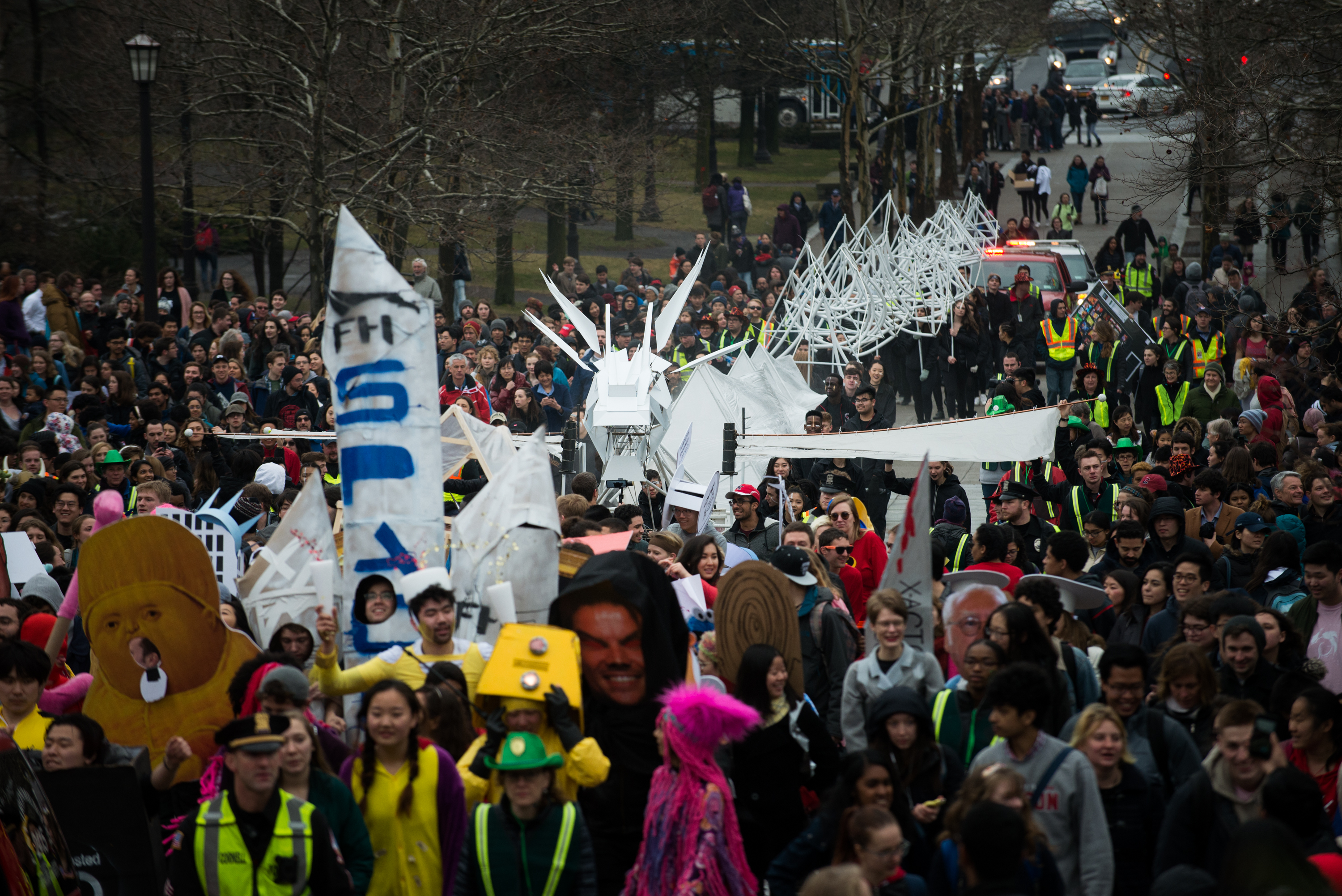 Winny Sun is a member of the Class of 2020 in the College of Agriculture and Life Sciences. She is a staff writer for the news department and can be reached at [email protected]