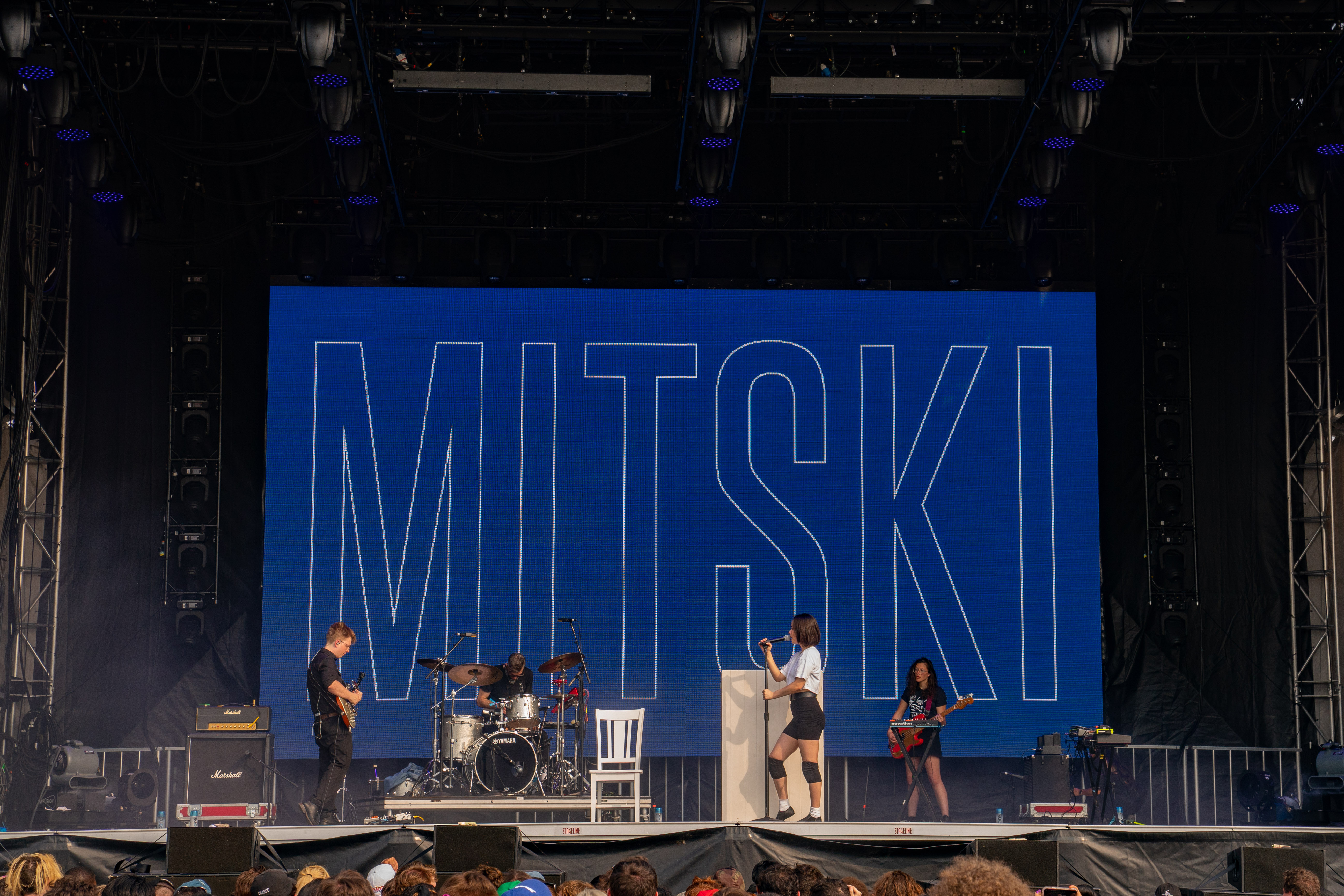 You don’t get much respect if you say Kacey Musgraves is the artist you’re most excited to see, I learned on the way to Randall’s Island for the first day of Governors Ball 2019.

After entering and passing a monument to the late Mac Miller, I headed to see the goofy, fun indie band Still Woozy. Dressed in a tacky, tucked-in white and blue t-shirt, lead singer and guitarist Sven Gamsky looked pretty much exactly how I thought he would.  He and his small but scrappy crew played hits like “Habit” and “Goodie Bag,” as well as a sweet cover of Mac Demarco’s “Still Beating.”

Next came Hippo Campus. It says a lot that, despite the talent that performed after them, it’s still their song “Buttercup” that’s playing in my head as a write this. I was worried they wouldn’t be as good on stage as in the studio, but these Minnesota rockers had their set locked down, playing songs from their new album Bambi as well as older ones like “Suicide Saturday” and “South.” In a similar fashion to Still Woozy, they struck me as being too big for their time slot; a feeling I would end up having about many of the smaller sets this weekend.

After Hippo Campus, I headed over to Mitski for the strangest set I would see all weekend. I’ve listened to a few of her songs from her last album Be The Cowboy, but I could not have predicted how radically different her performance would be from Hippo Campus’. To begin, she walked on stage, stone cold, and eyed the audience, before delivering her whole first song without moving. As if she was going to let her music speak for herself. “That’s so Mitski,” I thought to myself. But then she moved to a small white table and chair in the middle of the stage for her second song “Why didn’t you stop me?”

The rest of her set was more performance art than performance, as she toyed with, seduced and wowed the audience with intentionally mechanical, subtle choreography. I was as if she wanted you to be constantly aware of the fact that she was performing. “That’s … also … so Mitski,” I thought.

To those of you that persuaded me to see Brockhampton, thank you. From the second they emerged out of their golden plane set piece on stage, the audience was an absolute madhouse. And there’s just something about their twisted boy band personae that needs to be seen in person. Mosh pits seemed to open up organically and constantly, like one massive living thing. “Is everyone okay?,” they would ask after every song. “No!,” half the crowd would yell back. Wusses.

I expected Tyler, The Creator’s set to be even crazier, but I think the crowd was too star-struck to do anything but just watch him move. After coming on to a deafening roar from the crowd, he blasted away at a few tracks from IGOR – dressed in his signature neon blazer and wig. The new album has only been out for a week, but everyone around me seemed to know every single word already. But he has earned it, as the most dynamic voice in music right now.

His set was full of surprises, such as a time capsule performance of songs from his 2017 album Flower Boy and more (he even went back to Goblin to dig up “Yonkers”). Imagine the artist with the number one album in the world silhouetted against a jumbotron, singing “I can’t even lie I’ve been lonely as fuck” with thousands of screaming fans. It felt important, and I think he captured the feeling of what it’s like to be young right now.

“I’m not going to tell you how to live your life … but this song is good for making out,” joked Lord Huron frontman Ben Schneider before playing “The Night We Met” (or, “that song from 13 Reasons Why,” according to the high school girls next to me). Despite their set being squeezed in between The 1975 and Florence + The Machine, it ended up being one of my favorites so far — the setting sun setting the perfect vibe for their moody music. They have this timeless vibe, as if they’re the ghosts of some forgotten crooners who chose this over purgatory.

The 1975, on the other hand, are always hyper-aware of their role as artists in the modern world; their self-consciousness is integral to their music. And not just on tracks like “Love It If We Made It” and “Sincerity Is Scary;” Singer Matty Healy’s stage presence felt despondent and nihilistic. “Yo he’s definitely drunk,” a man turned to me and said. He was probably right. After lighting up a cigarette mid-performance, Healy made sure to tell the audience “Don’t applaud that.” We did anyway.

Lord Huron and The 1975 were good, but it was really the women that stole the show on day two of Governors Ball 2019. Catching the tail end of teen indie rock outfit Calpurnia, my first thought was “Is that the kid from Stranger Things?” (to which the answer is yes), but what was even cooler than rocking out with Finn Wolfhard was watching guitarist Ayla Tesler-Mabe. She’s gained a massive following by uploading song covers on Youtube, but it was incredible seeing her shred in person.

Next up was Clairo — one of the performances I was most excited to see. But despite the success of tracks like “Flaming Hot Cheetos,” “4EVER” and “Pretty Girl,” her set just didn’t feel complete (maybe just because she didn’t play my favorite song “Hello?”). To her credit, though, she had quite the crowd to have not already dropped an album, signaling that she’s definitely on the rise.

After Clairo finished I didn’t dare move, or risk being stuck in the back for Kacey Musgraves. From the banjo to the steel pedal guitar, it sounded like I was in the studio with her; sonically she is somehow both the most progressive country artist around and one of the truest to its soul. The whole set was fun as hell, but I won’t forget her stopping to yell “It smells good!” before going into the super chill “High Time.” She’s like that — able to please everyone at once, from country purists to those who would have never considered listened to country.

Now I’ll admit, by the time Florence + The Machine went on, I was wiped out. But even a half mile away, her voice was distinct and powerful — somehow even better than in the studio. Powerful enough that when “Dog Days Are Over” began as I was leaving, I couldn’t help but stop. She tore across the stage, her flowing white outfit making her seem like a fairy or a siren. Maybe her last album wasn’t amazing, but Florence Welch isn’t just a headliner, she’s a legend.

“Due to approaching severe weather all persons should move quickly and calmly to the nearest exit,” a voice advised from a loudspeaker, before tacking on one last “You’re doing great!”

The refrain was everywhere this weekend, but it seemed a bit patronizing as the bottom fell out around 10:30 Sunday evening and thousands of people rushed out of the gates.

That meant no Kaytranada, no SZA, no Strokes, and people let their anger show. Trash cans were tipped. Juuls were ripped in frustration. Someone was bludgeoning a replica of Lady Liberty with a piece of her own crown. But eventually, everyone moved off the site, leaving behind an incredible mess: Disposable cameras, beer bottles, pink cowboy hats and somebody’s nail clippers.

Fortunately, there was plenty of good music before things took a turn for the worse. The coolest part of the day was seeing SHAED, whose song “Trampoline” is dominating the Alternative charts right now, at the lowkey Bud Light dive bar stage. They seemed a little confined, as if the small stage couldn’t contain their success. But I was less than a yard away from lead singer Chelsea Lee, so I wan fanboying too hard to care.

Everyone else, though, seemed to be a little more excited to see Bazzi. He had a lot of fun with his audience; at one point starting a chant of “Chug! Chug! Chug!.” By that point, it was clear that the showers earlier in the day had scared off a good amount of festival goers — though it must have only been the fairweather fans that stayed home. Those that remained cheered as Bazzi strutted around, dressed in a red tracksuit with his hands wrapped like a boxer’s.

Louis The Child also had a small but scrappy crowd, but you couldn’t really tell; it probably helped that they played banger after banger. To their credit, their music is inventive enough to justify streaming it, but with enough energy to drive a live crowd wild. All in all, their set was great way to end the weekend.

Noah Harrelson is a junior in the College of Arts and Sciences. He currently serves as the Blogs Editor on The Sun’s Editorial Board. He can be reached at [email protected]