Junior Clarke Petterson scored half of Cornell’s 10 goals to boost his team to a playoff win. Cornell downed Syracuse on the road last weekend, and can advance to the Final Four with a win against No. 1 Maryland on Sunday. 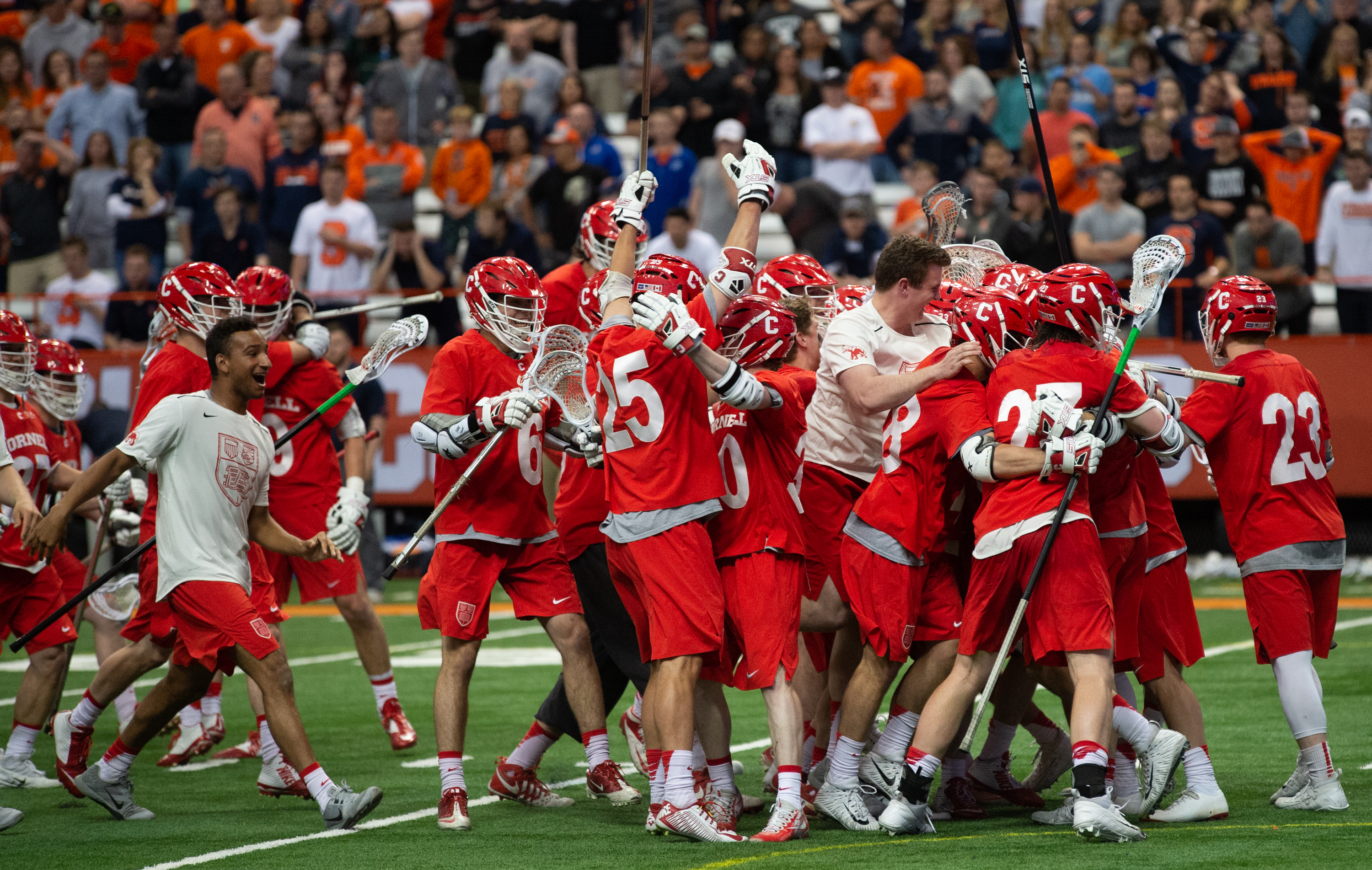 SYRACUSE — As the clock was winding down in the third quarter of the first round of the NCAA tournament between Cornell men’s lacrosse and Syracuse, junior attack Clarke Petterson fired his fourth tally of the game to tie the contest at eight.

The goal capped off what was a game-long comeback for Cornell, who trailed by as much as three goals and was never able to take a lead until Petterson scored his fifth — making it 9-8 with 11:47 to play in the fourth.

“I think I was mainly benefitting off my teammates dodging hard … I don’t think I had any dodges to score,” Petterson said. “I think that’s just a credit to how hard my team has been working to make the defense rotate and I was just there. I was the open guy. I was just trying to do my job to finish the ball.”

“That was a great win for our team right now trying to compete with the best teams in the country, trying to play the best version of Big Red lacrosse we can,” said interim head coach Peter Milliman.

It was not the greatest of games for Cornell statistically speaking. The Orange dominated the faceoffs and ground balls while also outshooting the Red 37-34.

“[Syracuse is] really good in those scramble situations,” Milliman said. “They had handful of those type of plays and that’s what gives them life, so we needed to find a way to clamp down on those more than anything.”

The opening quarter of the game was an entirely back-and-forth period. Syracuse struck first just 49 seconds into the game on an unassisted tally from Tucker Dordevic. But Cornell answered back less than a minute later on a goal from senior midfielder Jordan Dowiak. From there, the teams would trade goals twice more before entering the first break tied at three.

“I think the [Carrier] Dome is one of the greatest places to play that’s why Syracuse plays so well in here,” Petterson said. “It’s so hard to beat them in here as well.”

As the second quarter wore on, Cornell made some costly turnovers and defensive mistakes that allowed Syracuse to go up by three. But the Red proved its resilience, clawing back to enter halftime trailing by just one and using a strong defensive third quarter to keep the game tight, ultimately leading to Petterson’s equalizer.

“[Syracuse is] really athletic in the midfield and that can pose a pretty big challenge defensively,” Milliman said. “You’ve got to slide a lot. A lot of it is understanding the spacing and your environment.”

The Orange pulled a defensive strategy not unfamiliar to Cornell’s coaching staff. Syracuse’s top defender, Nick Mellen, was tasked with holding off sophomore attack Jeff Teat. Mellen was successful in his endeavors, holding Teat to just one point, but the strategy may have backfired on Syracuse head coach John Desko. Locking off Teat allowed Cornell to employ a five-on-five set, leaving extra space for Petterson and the others to work free of their opponent’s top long pole player.

“One of the important things for us to do is stay within the offense that we run, and continue to work the defense,” Milliman said. “Don’t get impatient, don’t try too hard to get it to Jeff.”

Senior goaltender Christian Knight came away with eight saves, including some vital ones down the stretch that helped backstop the Cornell defense’s game-saving final quarter.

In the end, Cornell was able to hold off the Orange — making an offensive push right down to the final buzzer.

But the unsuccessful final push was not without dramatic flair. Senior defenseman Jake Pulver laid a big hit on Syracuse’s Nate Solomon with just seconds on the clock. The play drew a flag from the officials, but the clock expired before Cornell could touch the ball and allow the penalty to take effect.

“I just tried to approach hot on him, I knew I probably wanted to get it to his right hand,” Pulver said. “When the ball was on the ground I knew there wasn’t much time left so I just tried to keep it on there.”

The win secures a place for Cornell in the NCAA quarterfinals in Annapolis where it will face No. 1 seeded Maryland at noon next Sunday for a chance to advance to the Final Four. It’s the first time Cornell has been this far in the national playoffs since it advanced to Championship Weekend in 2013.

“It’s awesome [to get to this point], I’ve got to credit Coach Milliman really,” Pulver said. “This fall was hard, really having to look in the mirror and think … I think the coaches did a great job getting us on track. After that, it was a matter of having everyone buy in and it started with my senior class.”